The 2019 Policing and Accreditation Conference will be held at Resorts Hotel and Casino in Atlantic City, New Jersey on December 4th and 5th, 2019.  The New Jersey Public Safety Accreditation Coalition will present a focus this year on Law Enforcement Mental health issues.

This is a timely and extremely necessary topic of our profession.  The presenters and accreditation classes will all be in relation to the topic.  Accreditation programs all include standards that involve; Early Warning System, Employee Assistance Program and Notification of on the job injury and death notification, among others, that relate to our topic and the need for clear and concise policy and accreditation adherence.

This conference isn’t just about Accreditation.  There are a host of other unique training opportunities that police executives and supervisors will find interesting and quite informative.  Check out our Conference Brochure to learn more about the classes.  Students can attend any training class regardless of accreditation program.

When you attend our conference, we will help you apply the “theory” of any training to the practical, real-world work you will do as an accreditation manager. Our conference classes are both designed and taught by seasoned accreditation managers/assessors specifically, to meet your needs; in policy writing, proving compliance, facility inspection, PowerDMS and Standards, successfully navigating your “official” onsite assessment, and much more.

When he was promoted to Sergeant in 1994, he was placed in charge of the Training Bureau in which time, he was also a Training Adviser at the Essex County Police Academy.  Sgt. Hogan has lectured all over the northeast for Police Academies including The FBI National Academy and currently he teaches at several NJ Police Academies and works for the Union County Prosecutors Office as an Agent assigned to Asset/Forfeiture Unit.

He has appeared on Fox Cable News, Hannity and is the topic of a Chapter in a book written by Douglas Paton, John Violanti and James Drylie called, “Working in High-Risk Environments”.  Sgt. Hogan has also appeared in films produced and Directed by Capt. Donna Roman (ret.).

While on duty one day, Sgt. Hogan was engaged in a field interview of a drug suspect when he was ambushed while still seated in his cruiser. During the course of the next several minutes, his survival instincts and training took over, while he was shot at 19 times, including four rounds striking Sergeant Hogan at point-blank range. Sergeant Hogan will give an in-depth depiction of a police officer’s human survival skills during an armed encounter with a suspect. Emphasis is focused on a police officer’s mindset before, during, and after an actual armed encounter with a suspect.

Most of his career was spent in narcotics with assignments to DEA and US Customs. He was the hostage/crisis negotiator for 15 years and the commander of the team for 5 years. He has volunteered to answer calls on a suicide hotline for six months.

He volunteered to work at Cop2Cop in mid-2008. A position opened in May 2009 and was hired as a peer support person. He presently work answering the phones and handles a caseload of clients.

He is the lead trainer and give presentation all over the State of New Jersey. He teaches QPR at numerous academies and conducts in-service training for many police departments. QPR stands for Question Persuade and Refer. It’s a program for suicide awareness and prevention.

Stephanie Samuels is a psychotherapist that works exclusively with police officers in New Jersey, New York, Pennsylvania, and Oklahoma. Ms. Samuels has lectured all over the country on PTSD and the fallout from departmental silence after officers are involved in critical incidents and undiagnosed PTSD as well as Vicarious Trauma.

Ms. Samuels began her career as one of the founding teens of Teen Line Cares. A mental health help line for teens. Ms. Samuels recognized that teens only trusted and confided in other teens. With this same concept in mind, Ms. Samuels went on to create two law enforcement officer hotlines. She is currently the Founder and President of COPLINE, Inc., the first Confidential National Law Enforcement Officers’ Hotline in the country manned by retired officers.

She is the general partner of The Counseling and Critical Incident Debriefing Center, LLC, which specializes in debriefing and long term counseling of first responders and their families. She taught at the Monmouth County Police Academy for 16 years and has been a guest lecturer at The FBI Academy in Quantico. Ms. Samuels was hired after the Boston Bombing to be the Clinical Director of the Boston Police Department Peer Support Unit and co-founded the LEADER (Law enforcement Active Duty Emergency Responder) Program at Harvard’s McLean Hospital and continues to work with the Boston Police Department in a different capacity.

Ms. Samuels has co-authored Under the Blue Shadow: Clinical and Behavioral Perspectives on Police Suicide with Dr. John Violanti and a chapter entitled “Police Trauma: Past Exposures and Present Consequences” in the book Managing Traumatic Stress Risk: A Proactive Approach, Paton, Violanti. She received the President’s Award in Social Work in 1999 for the legislation that she wrote to get a statewide hotline now known as Cop2Cop and critical incident debriefings for law enforcement officers. She received the “Honored Citizen Award” from the New Jersey Honor Legion for her contributions to the law enforcement community. She has authored five legislative bills in New Jersey and has helped get two of them passed. One bill was introduced in Pennsylvania that would recognize a psychological injury as the same as a physical injury for the law enforcement community. Ms. Samuels is the author of the “Dear Steph” column for the New Jersey State Fraternal Order of Police Newspaper. Ms. Samuels got her Bachelor’s degree from UCLA, a Master’s degree in Psychology from Antioch University, Los Angeles, and a Masters degree in Social Work from Rutgers University, New Brunswick.

Register by filling out the form below.

Please complete a separate form for each attendee.

Resorts Hotel and Casino will be offering our conference attendees discounted rates on rooms during the conference.  You may call 1-888-797-7700 to arrange your stay or book through their website. 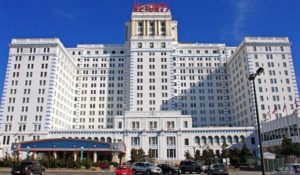 Click Here for Reservations (Use Group Code: VNJPSA9 for the best rate)